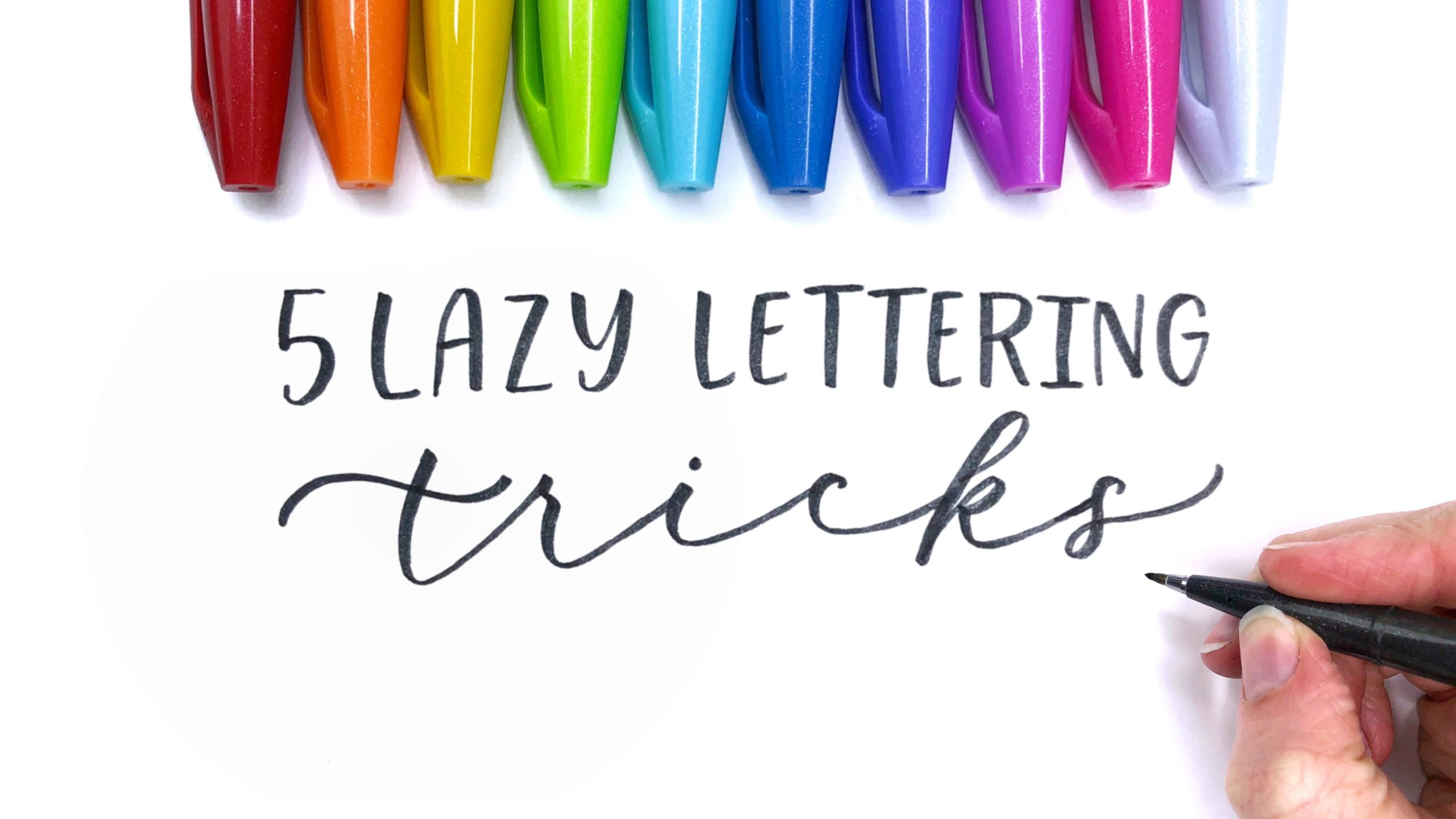 5 Lazy Lettering Tricks to Hand Letter With No Time

If you’d rather watch the video, see it here:

Lazy Lettering Trick 1: Use only one set of pens and a journal

I’ve talked about this a lot but it really works and here are a couple of reasons why.

First, do you struggle to choose colors for your lettering? It can be tricky right? and may take a lot of time and energy. If you’re using only one set of pens, those are the colors you’re choosing from. And if you like a rainbow palette like me, you know those colors will go together because they’re in the same set.

The next reason why this works is that you can bring your notebook and pens with you wherever really easily. You can take them when you travel or you can take them to the couch while you watch a show or keep them on your nightstand and letter right before bed or first thing when you wake up. You can use the small moments you have instead of deciding what pens you’ll use.

You can absolutely draw any font by hand. That’s the point of hand lettering right? But when you’re short on time, using a stencil is great. I found this stencil at the dollar store and I love using it for a word that I want to stand out in my quote. It’s just nice to know what tools you have to help. When you don’t have the energy to letter, but you still want to letter, a stencil might help you get through that.

Before we get to the third trick, I want to remind you that if you are actually too tired, you should sleep. The point of lazy lettering is to sort of trick yourself into practicing because it’s what you need for your self-care. If there are other things you need to do to take care of yourself first like sleep, you should do that. I don’t want you to feel any pressure to practice everyday just so you will one day have perfect lettering. I want you to feel excited about lettering right now, exactly where you are.

Lazy Lettering Trick 3: Have an easy basic font style you can use over and over.

There are so many styles you can use in hand lettering and there’s definitely a time to explore all of them. But do you have a go-to font? Mine is my Chunky Print Lettering style and it’s great. There aren’t any connections and so it makes spacing a little easier. I like to mix and match it with calligraphy fonts. It’s the ultimate lazy font because you basically can use your print handwriting and thicken the downstrokes. If you want to improve your print handwriting, I recommend my worksheets to help you practice this style.

You can letter a simple word and then decorate the background. I find it so relaxing to draw stripes and it doesn’t take a lot of time or thought. There’s just something about pulling my pen along the paper and watching the color appear. When you’re not feeling motivated to letter something long, just keep it simple and let it be imperfect.

Focus more on how it’s making you feel. It’s better to take 5 minutes to create something simple than to wait until you have 2 hours to letter something elaborate. You don’t have to spend 2 hours everyday to improve in your lettering. It may only take 5 minutes here and there. Those moments really add up. The more you letter, the more you’ll learn and figure out the things you like and don’t like. You don’t have to create a masterpiece every time you letter. It’s ok to letter something super simple.

Lazy Lettering Trick 5: Keep track of all your lettering things.

By this I mean your ideas, fonts you like, tutorials you’re trying, pens you’re loving, and quotes you want to letter. The next time you have a free moment but have no idea what to letter, you can look through your quote list to get ideas. You can keep track of it in a notebook or digitally like in Notion. I have created a printable hand lettering planner that’s going to be included in my new course which is coming in a few weeks. It’s called Intentional Lettering for beginners. If you want to create hand lettering that feels like your best self, I would love for you to join me.

Sign up for the hand lettering journal challenge here. When you are intentional with your lettering, you can use it to relieve stress, overcome burnout, and be your creative outlet or mindfulness practice. If that sounds like something you need, this new course might be for you.

I hope you enjoy your lazy lettering! 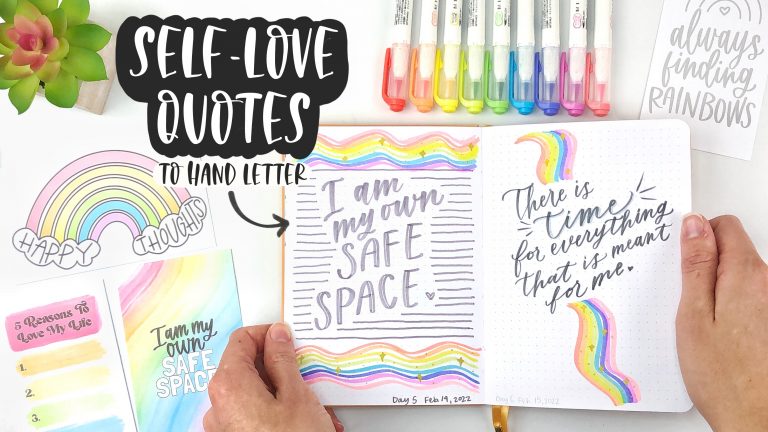 I have been hand lettering a daily affirmation since the beginning of 2022 and it’s amazing!… 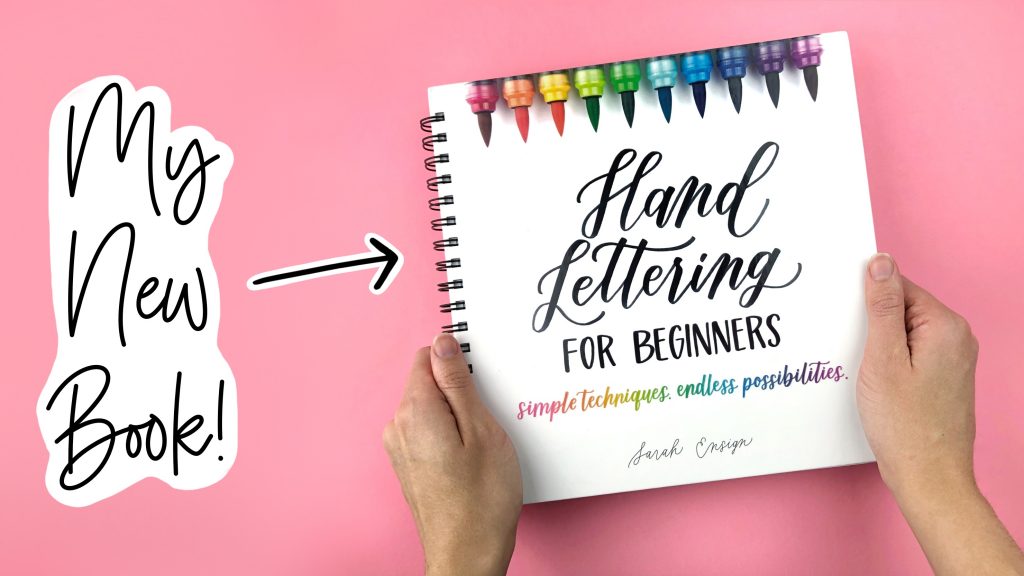 I am so excited to be finally sharing with you all my new book, Hand Lettering…

Many hand lettering beginners struggle to feel good about their lettering. If this is how you… 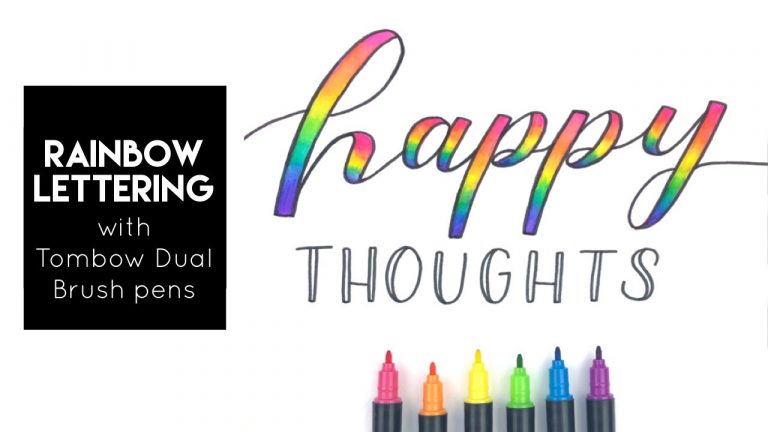 You want beautiful rainbow blends but don’t want to ruin your brush pens? In this tutorial,… 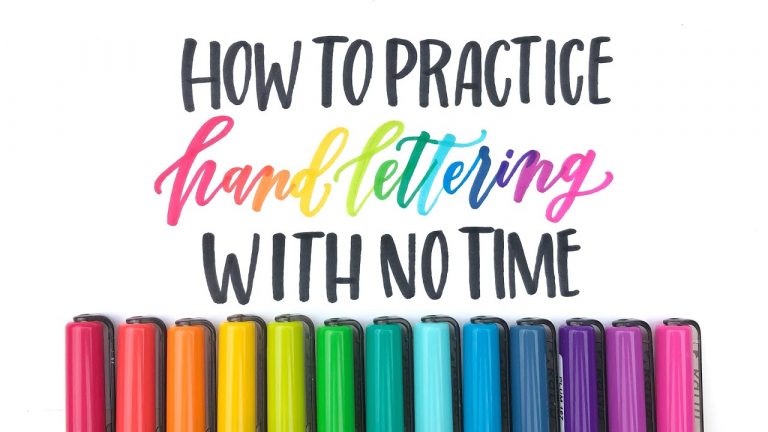 Hand lettering is an amazing skill that takes a lot of practice. How to practice hand… 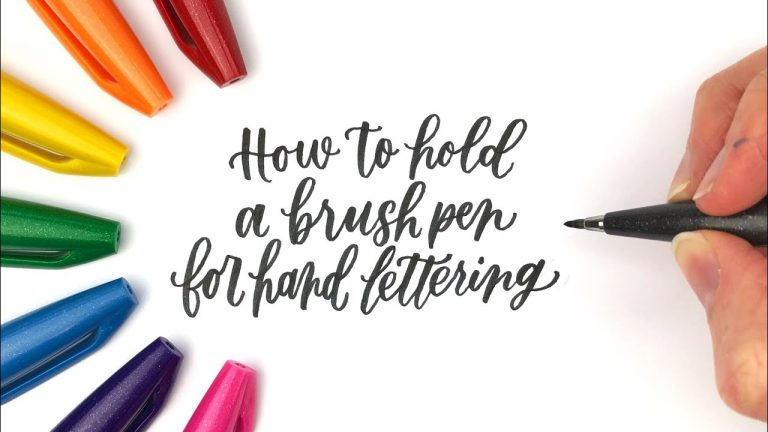 Are you starting to learn hand lettering? The basics of how to hold a brush pen…